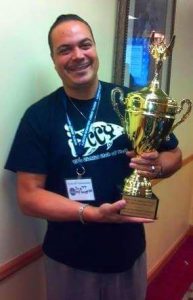 Scott was born in Teaneck, New Jersey where his parents had a 55-gallon tank with cast iron stand filled with goldfish. This would be the introduction to keeping fish that led to Scott’s future passion for cichlids. Later in his youth, Scott and his family moved to Greensboro, North Carolina. In his early teens Scott used some of his allowance to purchase his first tank. This was a 20-gallon freshwater aquarium, decorated with a ‘hot’ pink cave and home to a red tailed shark named… (you guessed it) Jaws!

As Scott grew older, his passion for tropical fish grew stronger which led to more tanks and an introduction to his first cichlids. By age 30, Scott had kept several different species of cichlids with his main focus being those found in the Central and South America region. In 2008 at age 40, Scott accepted a job offer and moved to York, Pennsylvania. Moving to a new city where you don’t know anyone is never easy, but Scott used the opportunity to build the fishroom he always dreamed of and expand on his collection of South and Central American cichlids.

On December 1, 2012 Scott created the Cichlid Club of York PA in the hopes of finding like-minded people who enjoyed cichlids. The Cichlid Club of York PA was a big success and Scott became its first President, a role he retained for three years. Today Scott helps the American Cichlid Association as Chairperson for the Breeder of the Year Program and Zoo Med/ACA Speaker Program. He also hosts the ACA monthly photo contest.

Scott currently houses 30 different cichlids in tanks holding over 1200 collective gallons. He has won multiple awards for showing his cichlids as well as awards for original articles, photography, and breeding. 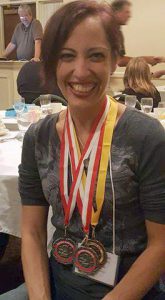 For over 20 years Elizabeth has been an animal activist. Working as a vet tech for Animal Rescue, Inc. since 2008, Elizabeth has dedicated her life to protecting all animals. She began keeping tropical fish later than most, setting up her first tank in 2011. Elizabeth was instinctively drawn to the larger cichlids found in the lakes of Central and South America and has built her studies around these cichlids.

In 2013 Elizabeth joined an up and coming club called the Cichlid Club of York PA, where over the years she would act as Auction Chair, Sponsor Liaison, and Membership Chair. Known throughout the tropical fish show circuit for her many victories showing cichlids, she has also written numerous articles for the online publication Cichlid Chronicles.

In 2015 Scott and Elizabeth created the popular cichlid information website King and Queen Cichlids (kingandqueencichlids.com), a one-stop cichlid event and information center. Together they have become known as the King and Queen of promotions and are recruited regularly to help promote and boost sales of upcoming tropical fish conventions.

Scott and Elizabeth bring immense enthusiasm and innovation, rich with the CARES spirit of positivity, as our CARES Press Coordinators. This dynamic duo is simply amazing and we are so glad to have them as a part of the CARES family!