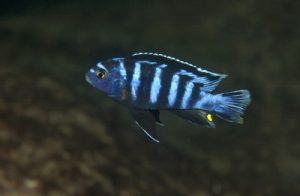 The population of species such as the narrowly distributed Chindongo saulosi has been in peril due to overfishing for the aquarium hobby. Reintroduction and the refrain of hobbyists from purchasing wild stock has allowed C. saulosi numbers to climb once again in its native habitat at Taiwanee Reef in Lake Malawi. Male shown here at Taiwanee Reef. Photograph by Ad Konings.

Lakes Tanganyika and Malawi contain about 25% of the earth’s unfrozen freshwater and about 18% of the global freshwater fish biodiversity. Lake Malawi by itself has (had?) more than 850 different cichlid species; that is more species in a single family than all the freshwater fish species of the North American continent together! The bad part of the picture is that both lake systems are at peril. 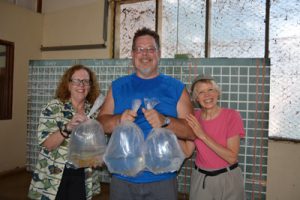 Preparing for the first reintroduction of Chindongo saulosi to Taiwanee Reef in 2013. Photograph by Ad Konings.

There are a number of factors, all human induced, that threaten the happy existence of the fish and the lakes in Africa. The direst of them all is the over-fishing that has taken place over the last decades and although the fish extractions by local fishermen far outweigh any other loss of diversity, it is the extraction of fish done in the name of the ornamental aquarium hobby that we hobbyists can address.

Besides the over-extraction of certain species or populations of cichlids, the ornamental fish industry is also guilty of introducing species to places they were not found before. In both lakes, almost all aquarium species have a restricted distribution and for collection the fishermen have to travel to the places where the desired species are found. After fish have been caught they are transported in vats or containers which are then kept afloat in the lake at night during stops. Over time, bad weather and/or faulty mesh covering of the containers have allowed fish to escape at camp sites and also at the final collection site from where the fish are transported over land. In Lake Malawi ‘exotic’ species have also been released on purpose, mostly at Cape Maclear, and about 15 species, originally from Likoma and Chizumulu islands, have established populations around Thumbi West Island and some further around the Nankumba Peninsula. It is currently unknown whether any of these species pushed indigenous species to different areas or even into extinction. What is known is that these exotics have started to interbreed with the native forms, which in itself is also a loss of diversity. 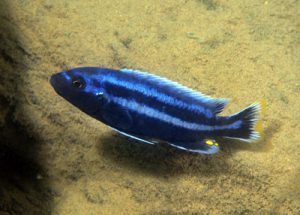 Melanochromis chipokae, such as this male at Chidunga Rocks in Lake Malawi, is in need of immediate attention due to overfishing for the aquarium hobby. With propagation efforts underway, the first batch of M. chipokae should soon be ready for reintroduction. Photograph by Ad Konings.

To give you an indication about the sheer loss of fisheries potential we should consider the following: in 1960 there were about 3.5 million people in Malawi which since then exploded to about 17 million in 2015. Fish provides (provided?) about 60% of the animal protein intake of Malawians. In 1987 about 90,000 metric tons of fish were extracted from the lake and 10 years later this was reduced to about 30,000 tons even though 10 times more fishermen were trying to obtain fish. There seem to no longer be official figures for the quotas at present, but NGOs operating in Malawi estimate that nowadays only about a paltry 2,000 tons of fish are caught per year. This shows that fishing is way past its equilibrium and fishermen at present are faced with a total wipeout of food fish in the lake.

Over-fishing in Lake Tanganyika has happened at a similar pace and already decades ago sand-dwelling cichlids of the southern and northern shallow waters were extirpated by overuse of beach seines. Fortunately sand-dwelling species usually do not have restricted distributions and as far as we know, none of the species has become extinct. Tanzania has adopted a stringent fishing policy lately by limiting fishing to areas at least 2 km offshore, but the situation in the D. R. Congo is totally unregulated and regarding food fish on the verge of total collapse. 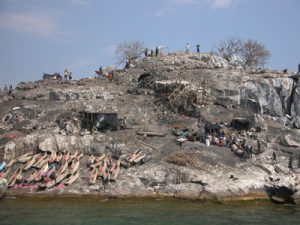 Over-fishing has also taken place by ornamental fish collectors. The affected species are without exception narrowly distributed species that are either found on an island or on an isolated reef. The most iconic of these cichlids are Chindongo saulosi, which occurs at Taiwanee Reef in the middle of Lake Malawi, and the so-called Maswa Duboisi (Tropheus duboisi) which occurred in a few populations just south of the Malagarasi River delta in Lake Tanganyika. There are several more species in both lakes that are on the brink of extinction and which need our help for their survival. 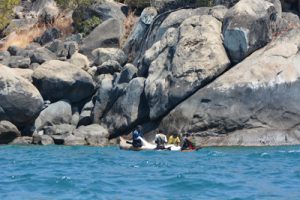 Fishermen preparing to cast their nets. Photograph by Claudia Dickinson.

In 2007, Jay Stauffer and I started the Stuart M. Grant Cichlid Conservation Fund which collects donations to fund projects to preserve the cichlids of both lakes Malawi and Tanganyika. Initially we funded the placing of anti-netting devices (ANDs) in the waters of the Lake Malawi National Park, preventing local fishermen from plying their nets there. These net-busters worked so well that the local community became very hostile to the deployment of such devices and we had to terminate placing them for safety reasons. Even in protected park waters where fish extraction is strictly forbidden we were unable to prevent poaching by the aggressive fishermen. 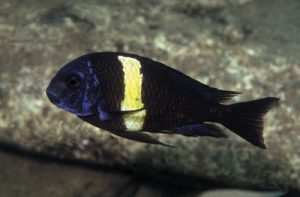 Tropheus duboisi is on the brink of extinction due to overfishing for the aquarium hobby. Photograph by Ad Konings.

A few years ago we shifted our goals to restoring populations of certain cichlid species that are threatened with extinction due to the aquarium hobby’s fault. We started with breeding, in Malawi, the iconic mbuna C. saulosi and reintroducing it to the almost non-existing population still at Taiwanee Reef. Due to these efforts and also to our propaganda warning aquarists to refrain from buying wild C. saulosi, it appears that the population has rebounded. This is probably the combined result of our four-year restocking efforts and the discontinued collection of this species. This proves that we are able to restore some rock-dwelling species.

Fishing regulation is much better enforced in Tanzania, and active patrolling by park rangers in the Mahale Mountains National Park for the last decade has resulted in the return of the cichlids of the shallow sandy shores. Fortunately it seems that enough potential resides in both lakes to allow a return to an earlier state when there was a balance between fish being produced and fish that could be harvested for food and aquarium. We should all be striving to return to those circumstances.