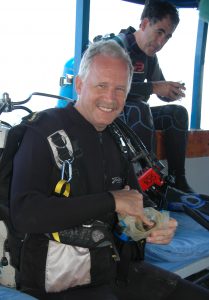 Born in the Netherlands, and living most of his early life in Rotterdam, Ad Konings kept his first cichlids at the age of 14. Studying medical biology at the University of Amsterdam, he earned his doctorate in 1980. In 1986, Ad moved to Germany to live with his future wife, Gertrud, and it was at this time that he began to breed Tanganyikan cichlids and to write books. Starting his own publishing company, Cichlid Press, in 1991, Ad’s first book to be published was Cichlids Yearbook, Vol. I. In 1996, Ad and his lovely wife, Gertrud, were married in Malawi, with dear friends Stuart and Esther Grant as the Best Man and Maid of Honor. The couple soon moved to El Paso, Texas because, as Ad says, “the sun always shines!”

Author and producer of over 30 books on Tanganyikan, Malawi, Central American, South American, and Lake Victorian cichlids, Ad is also in high demand as a celebrated speaker, his annual engagements taking him throughout the United States, Canada, Europe, and the Far East. His collecting expeditions include over 20 trips to Lake Malawi, with more than 1250 hours diving in the lake, 15 trips to Lake Tanganyika, with 400 hours of diving in the lake, and he has made over 16 visits to Mexico, as well as journeying to Ecuador, Belize, and Nicaragua.

Between his numerous expeditions and presentations, Ad flies 75,000 miles a year. With his characteristic enthusiasm for life and his work, Ad exclaims, “I haven’t worked a day in my life!”

A champion of conservation, Ad has dedicated his life to observing and preserving priority species in their natural habitats and sharing his vast knowledge and unique experiences with the world. Thank you so much Ad for your treasured friendship and all that you do for the hobby, CARES, and conservation priority fish!