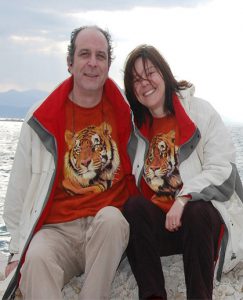 Both of us were born in Greece in the early 1960s. With a combined experience of 46 years in fishkeeping, we have kept more than 150 freshwater species of fish belonging to different families such as Anabantidae, Botiidae, Callichthyidae, Cichlidae, Cyprinidae, Doradidae, Mochokidae, Loricariidae, Osphronemidae, Poeciliidae, and Pimelodidae. Over the years we have successfully bred more than 80 species, which include 20 species of loricariids and 50 species of cichlids (amongst them eight Madagascan species).

Our fish enjoy living in a wide range of environments so planted tanks have also been in the picture from time to time. We have kept and propagated more than 50 species of freshwater plants in various tanks, ranging from George’s first planted tank housing Lake Malawi mbuna to high maintenance CO2 injected setups. For a period of time, tropical and temperate (Mediterranean) marine species were of interest too, which included fish, cephalopods, invertebrates, and corals.

Our common interests in fishkeeping include breeding different species and the preservation of aquatic life, either in captivity or in the wild. Differences in our backgrounds and personalities are reflected in the way we keep our fish. Thankfully these result in a synergy benefiting both of us and our fish alike. Marina, whose postgraduate studies and background are in political philosophy and education, is more interested in the behavior and interaction of the fish she keeps and she places a lot of emphasis on their environmental (including dietary) preferences. George, a pharmacist with postdoctoral research in immunochemistry, is mainly concerned about water chemistry, fish pathology, and medication.

Other interests include seeing new places, photography, reading, music, and cinema. We both adore animals and feel very strongly that they should be kept responsibly and treated with respect. Writing is also one of our hobbies which resulted in the creation of our website, MCH Portal at www.mchportal.com. Apart from that, we have contributed articles and photos to a good number of publications including TFH, FAMA, Sydney Cichlid Aquarium, Amazonas, Buntbarsche Bulletin, and Paradise Press. We are currently members of the British Cichlid Association, British Catfish Study Group, and Association Francaise Cichlidophile.

What a wonderful pleasure to have Marina and George on the CARES Team!
Thank you both so much for your many contributions to conservation and to the hobby!