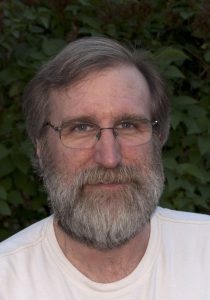 Richard Pierce has been keeping fish for as long as he can remember. His interest in all things aquatic led him to study Marine Biology, culminating with a Ph.D. in Biological Oceanography from the University of Rhode Island. He has worked in two public aquaria and in two retail aquarium stores. He currently maintains roughly 1,000 gallons in 100 aquaria in his fish room. Since his largest aquarium is 65 gallons, most of his fish are small. Although he keeps and breeds all kinds of fish, killifish, wild-type livebearers, and characins are of particular interest.

In addition to fish keeping, Richard enjoys photography, especially photographing fish and macro photography. He has won awards in both the American Killifish Association and NEC photo contests, and now chairs the annual NEC photo contest. He has spoken at many aquarium societies throughout the country and enjoys meeting other aquarists and visiting their fish rooms.

Richard has been an active member of the Tropical Fish Society of Rhode Island since 2003 and is currently their Breeder’s Award Program Chair. He is also active in the American Killifish Association, serving two terms on the Board of Directors, including three years as Chairman. He has also been an editor of the Journal of the AKA since 2010. He is currently President of the Northeast Council of Aquarium Societies, as well as President of the Southern New England Killifish Association (SNEKA).