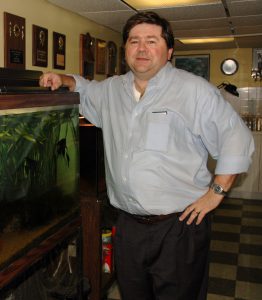 A multifaceted aquarist, Joe Ferdenzi has kept tropical fish for over four decades, and during this time has done extensive writing, breeding, showing, speaking, and judging. His skilled and articulate writing has been published locally as well as nationally, and he was awarded the high honor of Author of the Year by the Federation of American Aquarium Societies in 1994 and again in 1996.

Renowned for his breeding expertise, Joe has had numerous successful “first-time-ever” breedings and is among the top breeders in his home club, the Greater City Aquarium Society. Showing his fish across the region, he has won an abundance of awards, trophies, and ribbons, which include many Best of Show and Reserve of Show. He has traveled as far as Bermuda not once, but numerous times, to give presentations as a guest of the prominent Bermuda Fry-Angle Aquarium Society.

An active participant in the organized hobby, Joe is a member of local and national aquarium clubs and organizations. He served an unprecedented 19 years as President of the Greater City Aquarium Society in Queens, NY, is a Life Member of both the American Killifish Association and the American Cichlid Association, a member of the Long Island Killifish Association, and both the ACA CARES and GCAS CARES Programs. In ‘real life’ Joe holds a doctorate in law from Boston University and serves as an Assistant District Attorney in New York City, a position that he has held for many years.

Currently maintaining 45 aquariums in his fishroom, ranging in size from 125 to 1.5 gallons, Joe’s tanks house just about every type of fish imaginable because, as Joe puts it, he never met a fish he didn’t like! His present focus is on African and South American killies, Apistogramma species, and swordtails. When asked if he has two or three tanks that are particular favorites, Joe replies, “Yes, but more than two or three. One is my 20-gallon tetra tank, with assorted wild pencilfish and glowlights, plus a forest of one species of Cryptocoryne; another is my 15-gallon tank featuring small species of Southeast Asian fish and shrimp, and also featuring a forest of Cryptocoryne sp. and Java moss covered driftwood; my 90-gallon black angelfish tank with huge Corydoras schwartzi, framed by a jungle of giant Valisneria and a red Nymphea; and my very special 100-gallon stainless steel tank from the ’60s that houses a magnificent school of harlequin rasboras, along with other peaceful schools of Southeast Asian fish, decorated with two types of Java fern, Java moss, driftwood, and petrified wood.”

What is one thing about keeping fish that brings Joe the most enjoyment? Joe says, “I love having a slice of an exotic underwater world in my home―looking at it, nurturing it, and propagating fish and plants.” Any fish that is fortunate enough to find its way into one of Joe’s tanks has surely found the ultimate home!

Aside from his many aquariums, Joe has a most impressive collection of literature―his aquatic library being one of the largest in New York. Some of the books date to the mid 1800s, as well as many recently published books. Joe also collects antique aquarium memorabilia and is extremely knowledgeable on the history of the hobby. Having done a tremendous amount of research on the history of his home club, the Greater City Aquarium Society, Joe is well-versed with many accounts of its progression throughout the years.

Anita Ferdenzi has always been most supportive of her husband’s hobby and the couple has opened their household to many clubs, board meetings, and visiting hobbyists, all who are warmly welcomed by the ultimate host and hostess. Conventions are in turn graced by their presence.

Truly a warm and caring individual, and one of the most genuine, kind, and knowledgeable of hobbyists, Joe never hesitates to avail himself to all people, whether it be to impart his aquatic wisdom, or just to chat and say hello. When recently asked what he finds most enjoyable about the hobby he says, “I love sharing experiences with people and making friends.” It is our great fortune to have Joe on the CARES Team!