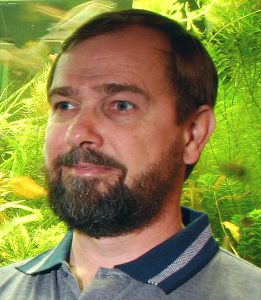 A research biochemist for Pfizer in St. Louis, Gary Lange has been keeping fish since the age of 10 and has been associated with the organized hobby for the last 35 years. He is a member of the Missouri Aquarium Society (MASI) and has held various positions in the club. A Grand Master Breeder in MASI, Gary has won Best Fish in Show on four different occasions, twice with rainbowfish.

In the fall of 1987, Gary founded the Rainbowfish Study Group of North America (RSG). Feeling that there weren’t many quality pictures of rainbowfish available, he decided to begin taking his own photographs. The rest is definitely history as Gary’s celebrated work has since been published in Tropical Fish Hobbyist magazine, Freshwater and Marine Aquarium magazine, and Aquarium Fish Magazine. Also an eloquent author, he has had several articles published in TFH and AFM.

In 2002, Gary imported eight new rainbowfish from world explorer Heiko Bleher, including Glossolepis pseudoincisus (millennium rainbow), Glossolepis dorityi (zigzag rainbow), and Melanotaenia parva (dwarf parva rainbow). In 2003, he made his second trip to Australia for further collecting. In 2005, he took the rainbowfish collector’s dream trip, collecting in Irian Jaya (New Guinea), and returned again in 2008. He currently maintains around 100 tanks and keeps about 30 varieties of rainbowfish and blue-eyes.

It is our great fortune to have Gary as part of the CARES Team!