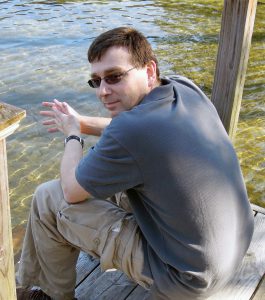 I have kept aquarium fish since 1982. Born in Switzerland, I set up my first fish tank at age 14, followed by a whole bunch more over the years. My fascination for nature and biology led to a B.S. degree in Ecology and Molecular Biology (1995) and a Ph.D. in Human Molecular Genetics (1998); both from the University of Bern, Switzerland. During my undergraduate years, I also worked several years for a local fish and pet shop (Spiezer Zoo, Spiez, Switzerland).
In 1992, I became a member of the International Society for Barbs, Tetras, Loaches, and Catfishes (IG BSSW). From 1994-2006, I was the editor-in-chief for its quarterly publication BSSW Report. I regularly travel to fish related events all over the United States and Europe, or to visit friends that I have made throughout the great world of fish. I am a member of the IG BSSW, American Cichlid Association, American Livebearer Association, North American Native Fishes Association, Minnesota Aquarium Society, and Columbus Area Fish Enthusiasts. Since January 2013, I am a senior editor and the translator for Reef to Rainforest Media LLC, the publisher of the famous CORAL and AMAZONAS magazines in Vermont.

After my doctorate in 1998, I moved to Columbus, Ohio for a postdoctoral fellowship in cancer research at the Ohio State University. In the fall of 2005, I became a Research Assistant Professor in the Department of Molecular Virology, Immunology, and Medical Genetics. My scientific work in human molecular genetics focused on identifying genes and pathways for acute myeloid leukemia (PNAS 2001, Vol 98), juvenile vitamin B12 malabsorption (Nature Genetics, 2003 Vol 33 & PNAS 2005, Vol 102), chronic lymphocytic leukemia (CELL 2007, Vol 129), and colorectal cancer (Science 2008, Vol 321). Most recently, I had the pleasure to write a review with Prof. Ralph Gräsbeck, who described Imerslund Gräsbeck Syndrome back in 1960! How cool is that? We also published on one of the oldest human disease mutations to date (OJRD 2011). Since 1998, I have published 50 peer-reviewed papers, including the results of a 12-year study on genetic vitamin B12 malabsorption.

Back in Europe during the 1990s, I had used Poret® brand aquarium foam for many years. Initially, I brought small volumes with my luggage to the States to build my first small fishroom in Ohio. But in 2006, my fishroom with over 60 tanks needed a lot more filter foam for the tried and tested HMF method. After failing to find a local source, I started importing the foam directly from the manufacturer, which among others supplies Eheim & Oase. I formed a company and SwissTropicals, LLC was born. Being Swiss-American, I expect things to work well, last long, and are simple to use: simplicity that works!

In 2012, we moved to Rochester, Minnesota. It is not as cold here as you may think, really! Seriously, the summers and falls are just perfect and in the winter, I hide in the fishroom anyway. I have since completely focused on expanding my company and becoming more engaged in the aquatic scene.

It is a great pleasure to have Stephan as a part of the CARES Team! Thank you, Stephan, for all that you do in the hobby world!